I’m starting to realize a lot of the recipes in my mom’s recipe box aren’t so much recipes as a collection of ingredients, where it’s up to the reader to determine how to put everything together and, in some cases, in what quantities. Well, so much for taking the guesswork out of cooking. Case in point is this recipe I found for ham soup. Growing up, I remember my mom making steaming pots of this delicious soup and was looking forward to recreating it, but I’ll admit the recipe card seemed to have left off a lot of detail. Hmmm. Does that say “simmer ham bone @ onion”? What does that mean???

You know those cooking competition shows, like Top Chef and MasterChef, where the contestants put together all their dishes off the top of their heads? I’m fascinated by that. To me, that kind of talent is in the same league as those one needs to be a rocket scientist. I’m more of a follow-the-recipe-to-the-tee kind of gal. That said, as I’ve gotten older, I’ve thrown caution to the wind more and more and tweaked recipes or substituted different ingredients. How has that turned out for me? Not so well, to be honest with you. I would say I have about a 25% success rate—meaning when I try to be a little creative with my cooking, I end up with a dish I would make again about 1 in 4 times. So, a natural-born cook I am not. This we can definitely establish. I like to cook, though, and I especially love to spend hours pouring over cookbooks, cooking magazines, and cooking blogs—so if passion counts for anything, I guess I’ve got that going for me, at least.
With this recipe, I knew I would have to step out on a limb again and guess at how to put it together. I remembered, from seeing my mom make the recipe, that the ham had to have a bone in it. Something about the bone is critical, I guess. I’m going to guess it gives the broth some flavor. I didn’t want to have to buy a ham the size of Texas, though. I am, after all, just a single gal. I felt I had seen ham steaks with bones in them, but I had a heck of a time locating such a thing—it was at the very end of the ham aisle and I stared right past it for a good several minutes. But I found it. Success! (Success knowing my memory does still work, that is.)

I knew I was going to make this soup in a crockpot, but I thought I should still cook up the ham first, which I did for 350 degrees for 12 minutes (just following the instructions on the helpful ham packaging).
So, here’s the actual recipe minus the confusing bit I referenced above:

Hmmm, again. So, now I have a cooked ham, what to do with the rest? I decided to fill up my crock pot (my crock pot is small, just like my tiny kitchen) with equal parts of the vegetables and let it simmer the night away. 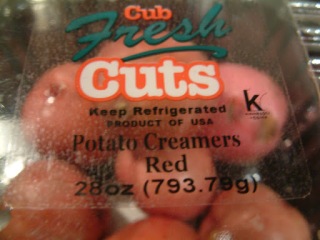 I washed the potato skins and cut the potatoes in quarters for faster cooking and easier eating.

I washed and threw in the baby carrots, as is.

I added four stalks of celery, which I chopped up into moderately small chunks. 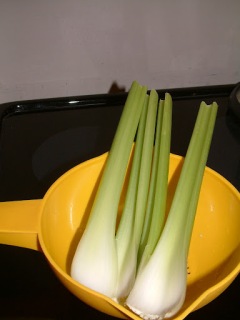 I ended up using about a half a yellow onion (I went with yellow—aren’t they supposed to be sweeter than white?). 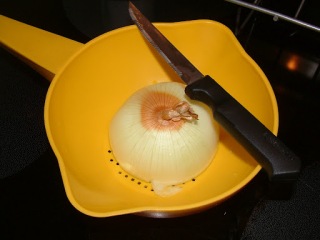 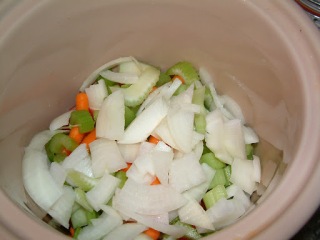 Then I added a whole green pepper and about half the bag of cabbage (you didn’t think I was going to chop up a cabbage from scratch, did you? Hey, I work eleven hour days and have a packed reality-television-show-watching calendar—my recipes have to be able to be put together in 30 minutes or less). 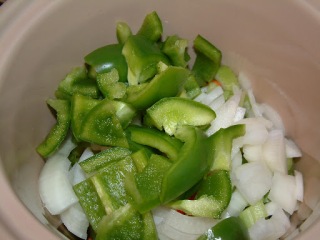 Finally, I added a ton of salt and pepper—I really shook the heck out of my salt and pepper shakers. I was a little worried that the ONLY seasoning for this soup recipe was salt and pepper. I didn’t want to deviate from the recipe, as the whole point of this blog is to follow my mom’s and grandmas’ recipes to a tee (well, as much as you can follow a recipe with no measurements and no directions), but I felt I needed to add flavor, so I erred on the side of lots of pepper and lots of salt.

I added the one cup tomato sauce (which I think is the same as 8 ounces, which is what my tomato sauce can happened to hold) to the top. 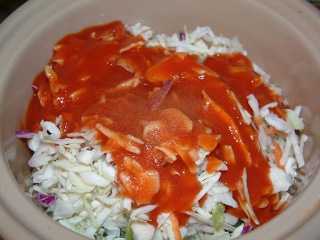 Finally, I topped it off with my cooked ham including that very important bone in the ham, that I knew was critical to this recipe’s success. 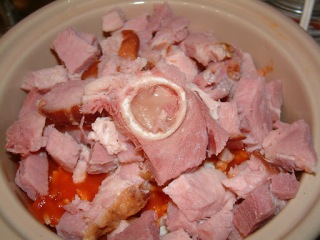 Then, I sat down for a minute to watch Dancing with the Stars. As I sat there, I thought “Will that little can of tomato sauce provide enough moisture?” I knew, or I at least thought, that the vegetables would give off some moisture as they cooked, but shouldn’t I also be adding water or broth? The more I write, the more I realize how very little I know about cooking. I should have named this blog “Musings of a Cooking Imbecile,” but I digress.

Anyhow, I concluded that “Duh, the recipe does say it’s a soup and soup needs liquid of some kind” (besides a small can of tomato sauce) so I opened the can of peas, which I was planning to add later in the cooking (because I didn’t want the peas to turn mushy), and I added the liquid from the peas to the crock pot. But then I thought that still didn’t look like enough liquid, so I added two cups of water. That brought the water level almost to the top of my small crock pot. “Oh dear, I’ve added too much moisture now,” I thought. But I left well enough alone and didn’t try to drain any of the water off.

About three hours into the cooking, I added the peas.

I cooked everything on low from about 7:00 at night until 6:00 the next morning. Do I think it really needs to cook for 11 hours? Probably 6-8 hours would be sufficient (whenever the potatoes and carrots are soft) but the convenience of the crock pot of course, is you can throw everything in at night and let it sit until you’re ready to deal with it again.

Was the recipe a success? To be honest with you, I think it needed more seasoning. In spite of the liberal and furious shaking of my salt and pepper shakers, I don’t think it did enough to add punch to everything. I would be curious what kind of seasoning would have made the difference. My co-workers tell me bay leaf is the thing to throw in all soups. What other seasonings work well with ham? At the end of the day, too, I think I have become more of a cream-based soup lover over the years. I must crave all that delicious fat that heavy creams and cheeses add.

The true test will be if my co-workers eat it up. I always bring all my cooking experiments to work the next day, as I can never eat all the food myself. We’ll see what they think. They seem to like even my epic cooking failures—or maybe they’re just being polite. They never leave any leftovers, though.